Jessie’s JoyJars: How a Passion Inspires Others to Never Ever Give Up

In this week’s episode of The UpBeat Podcast powered by CoachArt, our Executive Director and host Greg is joined by Erik Rees, a former pastor at the world-renowned Saddleback Church in Orange County, an author, and the father of Jessie, who was diagnosed with brain cancer in 2011 at age 11.

Immediately after her diagnosis, Jessie was inspired to help other kids at the hospital. She was concerned that kids hospitalized for long periods would be unhappy — and she wanted to change that.

So Jessie began making “JoyJars” — plastic jars that she filled with toys and all sorts of things to cheer up a sick kid.

In the year between Jessie’s diagnosis and her passing in early 2012, she made 3,000 jars for children with cancer. Now, in 2020, the number’s up to 310,000, covering all 50 states and 43 countries. Erik and his wife Stacey started the Jessie Rees Foundation to make sure that other kids with cancer have support, resources, and a Jessie’s JoyJar. Their goal is to give a JoyJar to each of the 300,000 children per year who are diagnosed with cancer.

Jessie’s wish to bring a smile to every child cancer patient carries on at NEGU.org— Jessie’s motto was Never Ever Give Up. The site is full of information and resources for parents and families dealing with a childhood cancer diagnosis, including how to donate JoyJars and lots of inspiring stories and tips from Jessie’s family.

Jessie’s journey inspired us to share another story of a child who was motivated by an illness to help others: SickKids shares the wonderful story of Tommaso, a child born with Hypoplastic Left Heart Syndrome who organized a walk-a-thon to support the hospital that treated him.

Do you know other amazing children who gave back after their diagnoses? Have some questions? Head on over to The UpBeat’s private Facebook group!

If you have a child who may qualify for CoachArt programs, visit: CoachArt.org 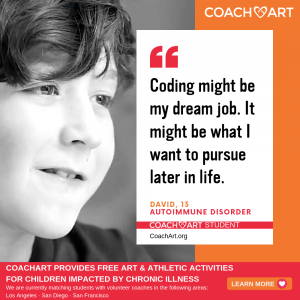 Archives
© 2020 The UpBeat, Powered by CoachArt. All Rights Reserved.